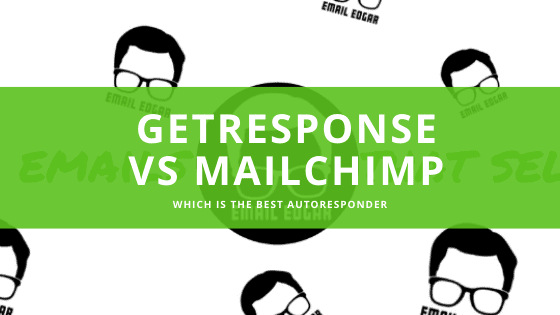 Which is the better autoresponder – Getresponse or Mailchimp?

In the past, a match-up between GetResponse vs Mailchimp would have been an uneven competition, as GetResponse was mostly geared towards providing an all-in-one solution, with Mailchimp offering simpler email marketing solutions.

However, in recent times Mailchimp have stepped up their game and have emerged as a real contender against GetResponse. While they still mostly cater towards a slightly different group of people, it’s worth considering which company offer a product that will best suit your needs.

Let’s take a closer look at GetResponse Vs Mailchimp – who they are, what they offer, and which one you should choose to handle your email marketing.

Founded in 2001, Mailchimp are an extremely popular email marketing company that offer a range of plans, including a free plan for people who are just starting out. For this reason, most people begin their first foray into email marketing using Mailchimp. After all, with a free plan – what do you have to lose?

While in the past, Mailchimp kept things fairly basic, they have recently upgraded their offerings and therefore updated their prices. While they still offer value for money, some of their options have become pricier to reflect the many additional features on offer.

GetResponse is an industry leader which has been around since 1998 – which makes it one of the longest running email marketing options. The award-winning company self-describes as one of the most user-friendly options to send out email marketing such as newsletters, campaigns, online surveys, and autoresponders.

The landing page creator and a number of other unique features make it the first choice for thousands of businesses across the world and over a billion monthly subscribers. They use an easy “drag and drop” email editor, a wide range of templates, and many other features to help support a successful email campaign.

Let’s have a look at how the two marketing companies stack up against each other.

The main differentiating factor between GetResponse’s pricing structures is the number of contacts – for the most part you get the same service, regardless of the pricing level you’re on.

On the other hand, Mailchimp restricts certain features to specific tiers. The number of contacts is one of the differentiating factors that determine the level of their pricing structure.

However, the way Mailchimp calculates the contact list you’ll be charged for is different – they include both subscribed and unsubscribed contacts as part of your total. So for example, if you have a list of 1,000 subscribers and 100 unsubscribe, you’re still charged as if you have 1,000. GetResponse would consider that to be a list of 900.

Mailchimp also introduced monthly limits on the number of emails that can be sent to your contacts. The limits range from 10,000 to 3 million, depending on the plan that the business purchases.

The limits are relatively generous and it’s unlikely that many people would need to breach the maximum amount, but it’s another factor that many business owners would rather not have to consider.

Like most other email marketing companies, GetResponse doesn’t have a limit to the number of emails you can send, even on their entry level plan. 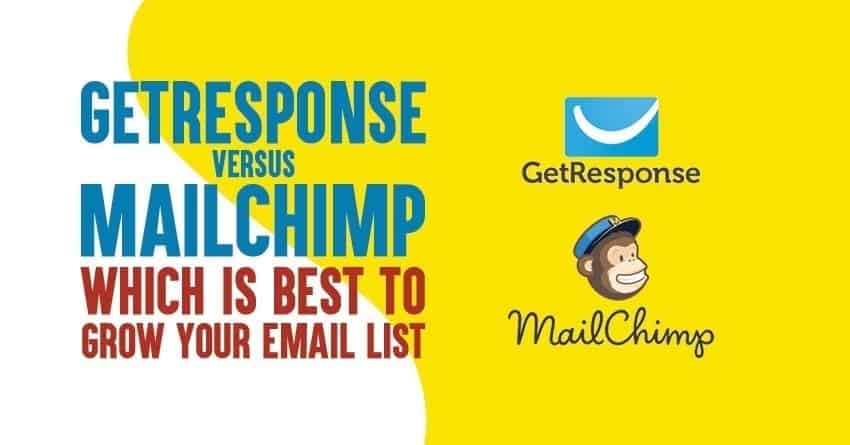 Both GetResponse and Mailchimp offer design and customisation options, including a wide range of templates and stock photos to choose from to make your email campaign stand out.

GetResponse have traditionally offered over 500 email templates and have recently introduced 60 new templates that have been modernised, as a common criticism of their past templates was their slightly outdated style. They are mostly responsive, meaning they can be successfully viewed on a range of devices.

Mailchimp offers 100 different email templates in a range of contemporary styles. They have two main types – drag and drop, and classic templates, and only the drag and drop templates are responsive.

With both companies, you are not actually restricted to using one of their pre-set templates. It’s possible to purchase templates from an outside supplier to use within the system. If you’re really tech savvy there is also always the option to use your own HTML code – although this isn’t a feature for Mailchimp until you’re purchasing at least the ‘standard’ plan.

Automation is hugely important for email marketing, but the “set and forget” nature of automation is only as good as the program you use. Setting parameters for email and newsletters to be deployed means that you can follow up on customers automatically and keep them engaged and connected.

There’s not much to choose between GetResponse vs Mailchimp – they both have excellent and extensive autoresponder functionality.

For both platforms, you can choose different triggers to autosend an email, such as a new subscriber, an email open, click-throughs, completed purchases, visits to websites and user data changes. If a customer deploys one of these triggers, the system can be set up to send an email in response.

The GetResponse system manages automation in a flow chart type system, or you can choose to implement a drip-style campaign. Mailchimp has similar options, but generally has a template-based approach where you can adjust pre-arranged email systems to suit your subscriber base.

Keep in mind that while sophisticated, Mailchimp’s autoresponders are not available on the entry level plans.

When organising how the automation will work for you, GetResponse offer a visual representation of connections and triggers, making it easy to decide how to set up your autoresponders. Mailchimp simply has a list of triggers, which doesn’t adequately convey a good sense of how it will all work.

Function is more important than appearance, but it’s still good to have an easy interface to work with. The two email marketing tools opt for a different approach.

Mailchimp has a more minimalistic design, with large fonts and lots of space. However, GetResponse utilises more drop-down menus and a more traditional interface design.  Both offer good usability, are easy to navigate, and have good design and logical menu structures.

It’s a useful tool for any email marketing campaign, which allows you to keep your targeted emails fresh and relevant. GetResponse allows you to test up to 5 versions as well as other variables, no matter what plan you’re on.

Mailchimp will allow you to split-test three versions, unless you’re on the most expensive plans where the number jumps to eight different versions. Mailchimp also offers social media reporting, which GetResponse does not natively offer.

Both Mailchimp and GetResponse offer extensive reporting options to track how your campaign is going. You can keep an eye on click throughs, unsubscribes, ecommerce tracking options, and open rates, and have extended insight into your subscribers to help you understand your audience.

Both Mailchimp and GetResponse have the option to design forms, and then embed the forms on your website. But each is better in different areas.

Getresponse has more design options, and there are plenty of templates to choose from in a wide range of styles. Mailchimp is slightly better at catering to mobile devices, featuring pop-up forms that are responsive to the type of device being used.

One of the things GetResponse are most known for is their landing pages. They offer comprehensive landing page functionality, including many templates, split testing, timers and even stock photographs available with any package.

Mailchimp do offer landing pages on all plans as a relatively recent development, but it’s not as comprehensive as GetResponse – they don’t offer A/B testing and only include a small number of templates.

If you’d like to create a simple web page, Mailchimp has a web design tool that can give you something to work with. It probably won’t be enough for most businesses, but it’s a great start and included on all plans.

It’s important to be able to customise your service as much as possible, and what these companies don’t offer themselves, they can provide by way of integration.

Mailchimp and GetResponse both offer integration with a massive number of other services both small and large, with the option to integrate smaller functions or massive services like PayPal and Facebook. While Mailchimp seems to be less innovative with their options, GetResponse relies heavily on a tool called Zapier to set up a lot of their integrations.

However, that doesn’t affect functionality. With the help of integrations, you can turn your account with GetResponse or Mailchimp into a custom service that meets your needs and increases your customer engagement.

The issue of pricing isn’t as straightforward as it might otherwise seem. If you’re looking for a free service, then that decision is easy – Mailchimp is the only provider that offers a free plan, although GetResponse does have a 30 day trial if you’re just interested in checking it out.

However, for the other options, there’s no clear answer as to which is the better value. In general, Mailchimp offers better value on the lower end of the pricing scale, while GetResponse tend to be better value as the subscription level increases.

That being said, there are other factors that can influence pricing. For example, Mailchimp’s policy of including unsubscribed customers as part of your list could mean as time passes, you get less value out of what was initially a cheaper plan.

However, the basic pricing is as follows:

GetResponse also offer discounts for paying a years’ subscription in advance, but there is no refund if you change your mind.

No comparable discounts are available for Mailchimp.

GetResponse vs Mailchimp – which should you choose?

Mailchimp and GetResponse roughly cater to different needs. While Mailchimp has changed their service to include a much wider range of options, in many areas they still fall short of the functionality that GetResponse offers.

For customers with a small client base who are looking for a lower cost (or free) option, arguably Mailchimp is the less expensive option, while still offering a great service.

At this level, it probably comes down to personal preference, and potential interest in a specific feature (like a web page builder) might tip the decision either way. To find out, both offer free options to trial the two and see which best meets your business’s needs.

However in general, the comparison between GetResponse vs Mailchimp has a clearer winner. As Mailchimp have introduced the email limits, don’t deduct unsubscribed customers from their list, and don’t include important features on their lower level plans, GetResponse have the edge.

However, both include great features for a reasonable price, and using either is likely to support your email marketing strategies and boost customer engagement and connection. The best way to find out is to give them a go! Make use of the free trial, and start making email marketing work for you.

link to What A Barista Taught Me About Selling Real Estate

I’m a coffee addict. I love the stuff but only if it’s good. And to be good it has to be made by a professional barista THEY DRESS FOR SUCCESS A barista wearing a 3 piece...

Continue Reading
link to GetResponse vs Active Campaign: Which Is Better?

Getresponse Autoresponder or Active Campaign Autoresponder? One of the highest cost-to-benefit ratios for a business comes from email marketing. For relatively low cost and effort,...